This article on which book format is best for enhancing literacy and language skills and bonding with the parent seems to back up other surveys about ebooks.

Ebook readers certainly have their advantages, mainly being able to carry dozens of titles, but we interact with a screen differently to how we relate to a physical object. A book isn’t just the words on the page, it’s a physical object that we feel with our skin, that we manipulate with our hands and which smells in a way that’s redolent of a pleasurable experience—think of the odour of a new bookshop and of a secondhand books emporium. Hard to get turned on by the smell of a smart device, be it a laptop, phone or Kindle. 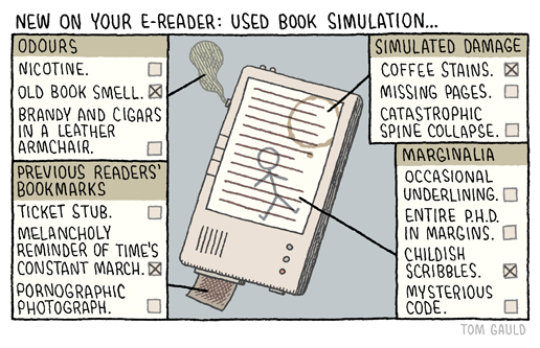 Having a glass screen between us and the words is not only a barrier but also carries connotations of being work-related or a way of killing time with meaningless web surfing. Neither attitude is conducive to achieving the type of concentration needed to learn from and enjoy a book.

A 2014 survey showed that recall of events in a mystery story was worse by those who read using a Kindle.

Furthermore, reading from a device that’s basically shining a light into your face, is a poor way of relaxing while you’re in bed, as your body needs to produce melatonin for you to sleep properly.

This article in the Guardian explores some of the problems with ebooks, not the least of which are plagiarism and piracy. 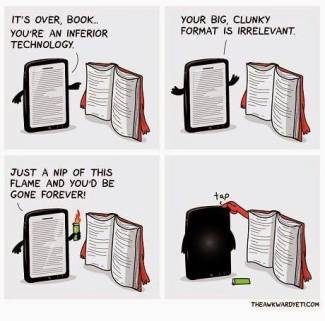 It’s sometimes said that ‘Imitation is the sincerest form of flattery,’ but it doesn’t apply to what is effectively fraud. A writer acquaintance, who’s written a series of modestly successful children’s adventure stories, published as ebooks, was alerted by a friend travelling in Asia that her books were for sale in China as cheap paperbacks. Her friend moved onto India, where she also found them in street markets. She recognised them, as she’d designed the book covers—which had been altered to look like Chinese and Indian children. So far as they could ascertain, the supposed authors’ names were the only thing the plagiarist wrote themselves. The writer could only speculate on how many millions of sales she’d made, without knowing it. There was no way of stopping the trade.

Should this piracy have occurred in the West, legal action could be taken, but even when that happens, book pirates fight back. It beggars belief, but one of the most notorious of them has launched a GoFundMe campaign to pay for his defence against being sued.

Do you ever feel like the world is going increasingly wrong?

I sound like I’m against ebooks, which isn’t the case, what with 45 titles published and five novels to begin releasing this summer. I must admit, I’ve never read a novel in digital format. The most I’ve read is probably a few thousand words of a PDF download writing guide.

I’m online for 12 hours daily, up until midnight, 90 minutes before I fall asleep—time I fill with reading a book in physical form—my brain appreciates the change of pace.

If you have children, how do you read to them?

What format do you read for pleasure…and for work?